A new world speed record has been set by the waveguide-coupled germanium photodiode developed at IHP. The breakthrough was achieved through a special thin-fin design in which a germanium lamella was integrated as part of a photodiode on a silicon waveguide. 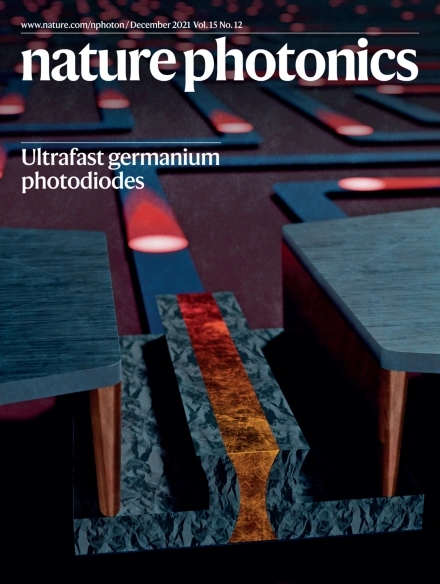 The cover of the December issue of “Nature Photonics” shows an illustration of the waveguide-coupled germanium photodiode developed at IHP - Leibniz Institute for High Performance Microelectronics. © Nature Photonics/Anna Lina Orsin 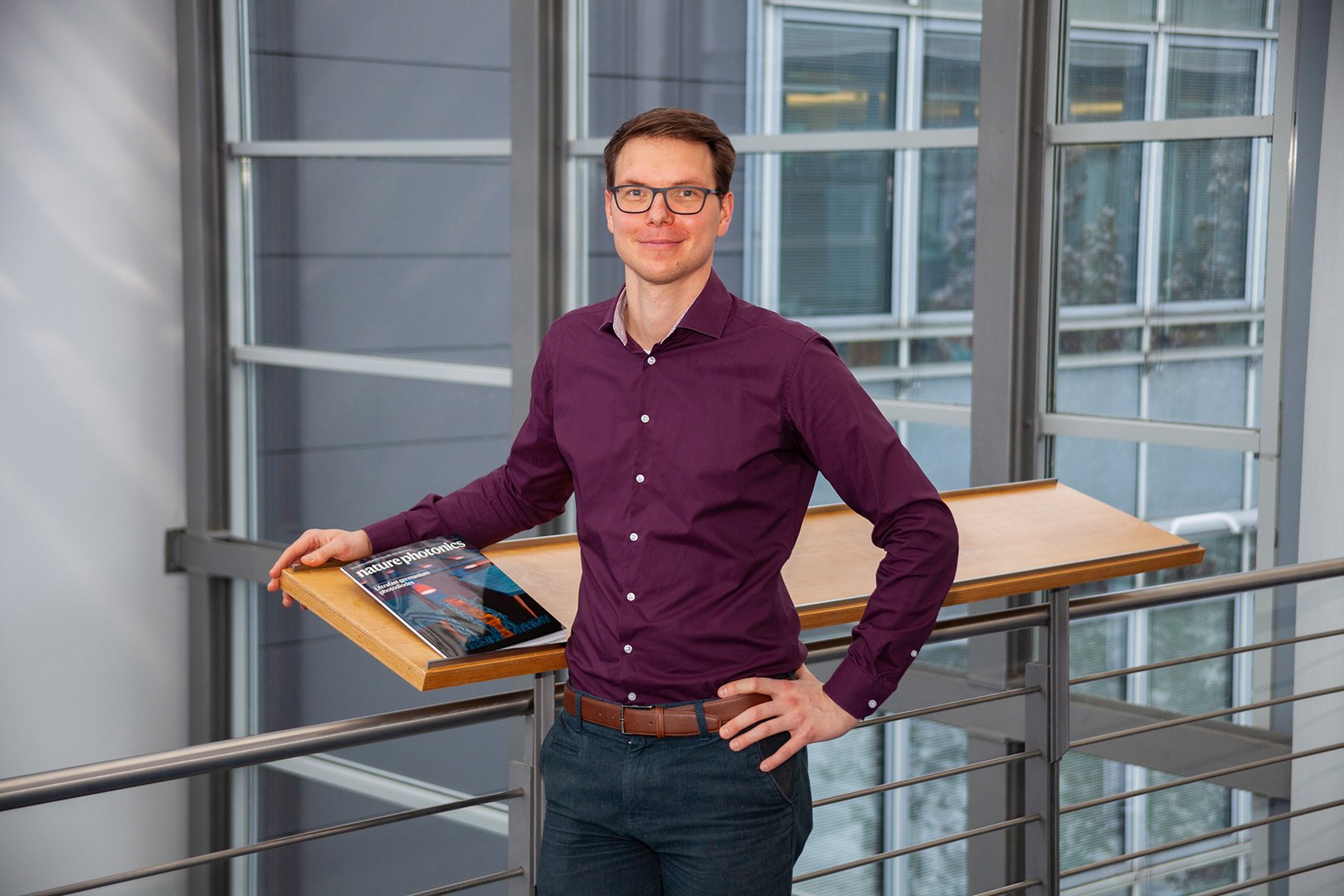 First author Dr. Stefan Lischke has been working at IHP since 2007. © IHP/Franziska Wegner 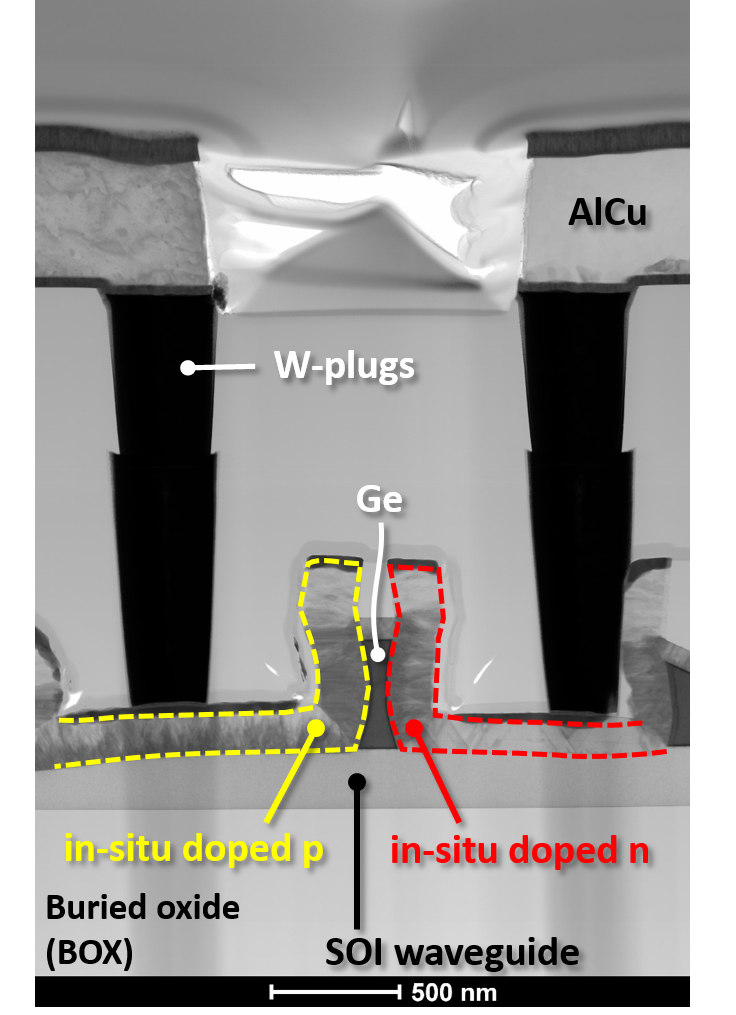 The scanning transmission electron microscope (STEM) image shows a cross-section of the new photodiode. The germanium, which absorbs the light guided in the silicon waveguide, has a width of only about 60 nanometres at its narrowest point. © IHP

Frankufurt (Oder). A new world speed record has been set by the waveguide-coupled germanium photodiode developed at IHP - Leibniz Institute for High Performance Microelectronics. The breakthrough was achieved through a special thin-fin design in which a germanium lamella was integrated as part of a photodiode on a silicon waveguide. The results of the cutting-edge research were published in the renowned journal “Nature Pho-tonics”, which chose an illustration of the photodiode for the cover of the December is-sue, thus emphasizing the significance of this research result.

Optical waveguides make it possible to meet the exponentially growing demand for data through ever greater data transmission rates in communication systems. After optical transmission via the optical fibre, the modulated light is converted into electrical signals by photodiodes. Until now, demands for the highest data rates could only be met by InP-based detectors. An international group of scientists under the leadership of IHP has succeeded in producing a waveguide-coupled germanium photodiode by means of a novel device concept, which for the first time surpassed the bandwidths of InP-based photodiodes. The opto-electronic bandwidth of the germanium photodiode could be more than doubled compared to the previous IHP record of 2020 without affecting important parameters such as efficiency and dark current. This makes the presented photodiode the fastest of its kind, which is of direct relevance for applications with ultra-fast data transmission, for example in communication, but also in signal generation and sensor technology. In particular, the realisation in a silicon-compatible material system makes it possible in the future to manufacture high performance, electro-photonic systems cost-efficiently and in large quantities.

"Commercial germanium photodiodes have opto-electrical bandwidths around 50 GHz," explains IHP scientist Dr Stefan Lischke, the first author of the scientific paper. He has been working at IHP since 2007 and was involved in setting the first world record of 67 GHz bandwidth of an IHP germanium photodiode in 2015.  Stefan Lischke completed his doctorate on integrated photodiodes in 2017, with the aim of further developing the component. Initial changes in the layout and optimisations in the manufacturing process led to partial success in 2020: a photodiode with 110 GHz was presented at the International Electron Devices Meeting (IEDM), the most renowned conference in the field of electrical devices. As part of further device research, scientists and process engineers found a way to manufacture the new photodiode with even smaller dimensions in IHP's pilot line. "We knew we had succeeded in doing something groundbreaking," says Stefan Lischke enthusiastically. "The very small photodiode has a width of only about 60 nanometres at its narrowest point, that means only a layer thickness of about 500 germanium atoms. These dimensions are the key to the high speed." To measure the bandwidths, the component was sent to the USA, to the working group of Prof. Andreas Behling at the University of Virginia. The top team in the USA is able to measure frequencies up to 350 GHz and was thus able to verify the world record of the germanium photodiode at 265 GHz.

"For such a development, creativity, passion and commitment are needed in addition to exceptional technical and technological expertise," said Prof. Gerhard Kahmen, Scientific and Technical Director of IHP, in praise of the achievement. "The silicon photonics team in our Technology department at IHP has succeeded in further developing the photodiode as one of the most important components so that it can be used for extremely high data rates beyond terrabits per second. The development of this record-breaking device underlines that industry-oriented German research is capable of achieving top performance in the field of semiconductor technology. Such results are necessary to take a step towards technology sovereignty."